It’s not even Thursday yet, but on a scale from one to Liam Neeson’s daughter in Taken, I’m extremely nervous about leaving the US. Yes I watch too much TV. As nervous as I am, my bags were entirely packed over a week ago. You’d have to know me personally to know that this is nothing out of the norm. I literally created day schedules in my head and coordinated outfits for “just in case” activities. Yes. It’s that deep.

Sorry my transitions between events is trash. I’m trying to soak in all of this trip while journaling moments as or after they have happened.

And we’re off. United Airlines is trash. And I say this without having been dragged off the plane. The stewards were extremely rude and inconsiderate.

Immigration gave me such a hard time. For my first time being out of the country, I was pretty tired of being an American. That’s all they kept repeating. An officer stopped me before exiting the airport (mind you he stopped no one else) and started asking me questions in Spanish. This half way conversation lasted a full 10 minutes before he let me go. I’ve never been happier to see Rafael in my life. Initially we cruised the city with his friend Alex. I took in the sun, sounds and scenery. Just all of it! This wasn’t Townsville. This wasn’t Greensboro. And it damn sure wasn’t Myrtle Beach! When we went to the exchange to convert my US dollars to pesos, you couldn’t tell me that I wasn’t ballin. *cues Pesos by ASAP Rocky.

Alex is forcing me to remember the Spanish I failed. Somehow my memory comes back and I’m able to tell him my age, siblings, likes etc. I impressed myself.

Tonight I tried yucca and eggplant. It’s official. The only eggplant I like is the emoji. The fried yucca was very tasteful. I’ve quickly learned two things. Seatbelts are necessary. And I’ll never take the US sewage system or hot water for granted ever again.

Cousin Deborah took me to Monumento Natural Cuevo Los Tres Ojos while Raf slept most of the day away. It was nothing that I imagined a cave would be like. Breathing was a little tough but I made it.

Take a look for yourself.

We had dinner in the Colonial district. It was one of the only touristy sites we visited. It wouldn’t be me if I didn’t have my amaretto sour……. 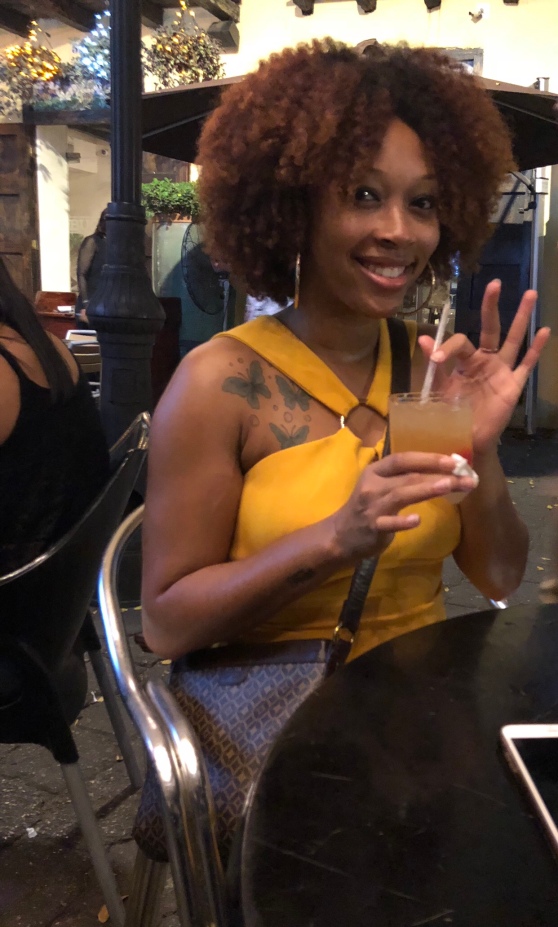 …..or being a creep admiring couples…….. 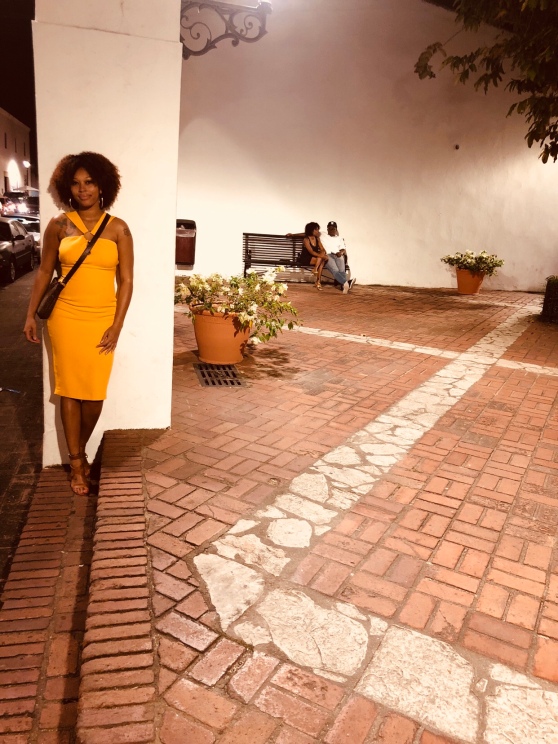 ……….or having interesting themes for pics 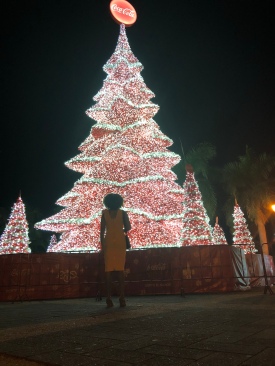 “All I Want for Christmas is You”

All those $5 merengue and bachata classes at Artistika paid off! I can officially say I’ve experienced my first club here. One word. Lit. Unfortunately there was no room for the electric slide or the wobble but that’s okay too. I had quite a few partners. Then at one point I got lost in the groove and just started winding. The winding turned into grinding. Then what do you know, I was twerking! I couldn’t help myself. Lol. All i know is that it was hot and I had to put on for US while I was here. Dominicans party hard. As in, I was yawning by midnight and ready to go by 2am, because well, that’s what time the lights usually come on in the club. Deborah and I left and the rest of the crew stayed. 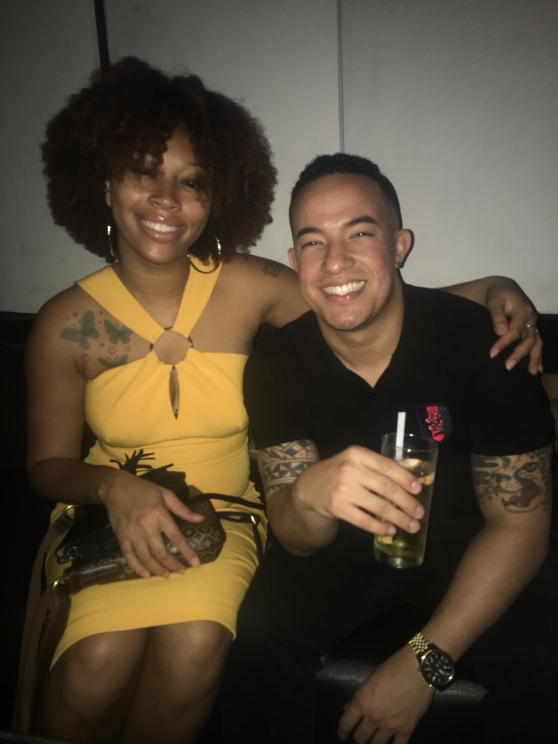 So. After only getting another 1.5 hours of sleep, it is now 5:45am and what is Rocky doing? Climbing a roof. Yes you read right. Climbing a roof. So somebody who’s name I’m not going to mention (Rafael) didn’t ever leave the club.  So back to my story. I called Raf at 4:40 in preparation for the overnight excursion. Luckily we packed our bags the night before. So he shows up around 5:15. I’m ready to roll. Get to the door and the top lock REFUSES to budge. Nada. NADA!!!!!!! Now I still can’t figure out how i manage NOT to have a panic attack at this point. Under any other circumstances I probably would have but not this time. The lock still didn’t budge even when I passed him the key through the window. So. How did I get out you ask? Well, turns out, this 10 minutes we have been trying to unlock this deadbolt, there is a back door!

All of a sudden Raf becomes a gymnast and I see him climbing from the roof!!!! I let him in, he grabs his things and asks me to do something that I’ve never done. Yep. The only way out was to climb the roof. Listen, you can take the girl out the country but you can’t take the country out the girl. We used a small step ladder to get to the bars above and Raf had me stand on his shoulders to reach a ledge on the roof. Breezy. His brother was in waiting to assist at the top. Now to get down from the second floor. I had to hop another ledge and climb down a ladder to get down. Yet another breeze. How sway? When it comes to heights I have zero fears. I guess you can call it one of the perks of always having been tall? Well. Anyhoo. I’ll spare you all the crazy driving extremes it took to get us to our bus this morning but hey, we made it. And that somebody from earlier is already sleep not even ten minutes into the ride. I’ll tell you one thing though. Y’all should have seen me climbing!

We headed to the bus location to begin our overnight tour.

I am a morning person. Clearly Rafael is not. 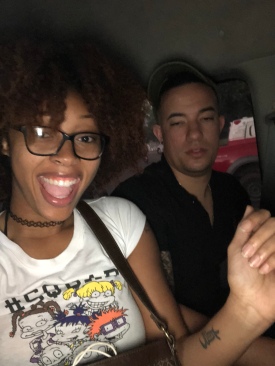 The tour we took was called Bahia de las Aguilas.

Lisandro was a our tour guide and man was he amazing! While the roads are atrocious, he made sure that we arrived to our final destination without a scratch. He allowed us to stop and capture amazing images along the way and didn’t mind how long it took. (Lisandro is on the left, the rest of the gang on the right). 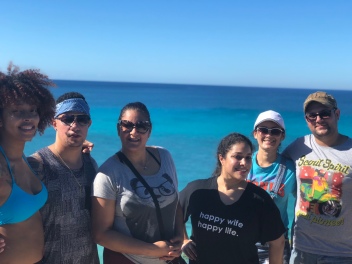 Our first stop on the tour was Barahona. 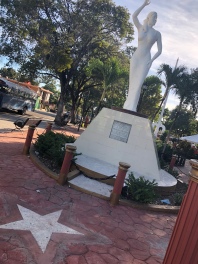 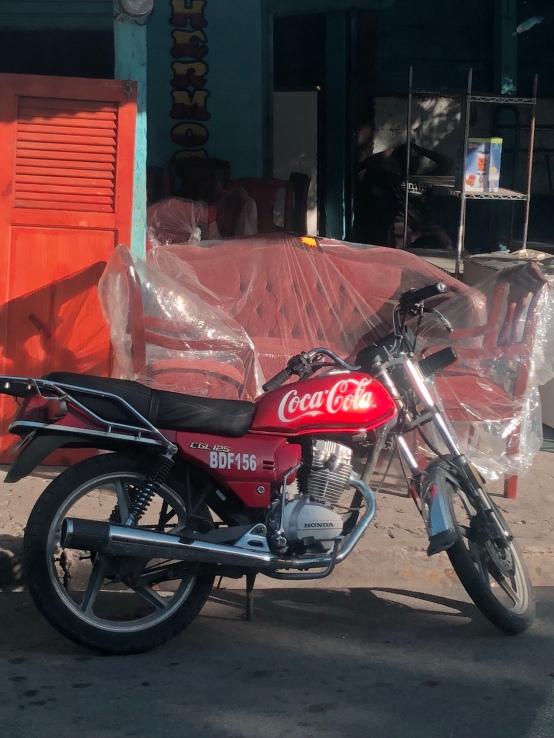 Riding a motorcycle with two other people and no helmets or protective gear. Check. All “tree” of us. Talk about risking the fall! 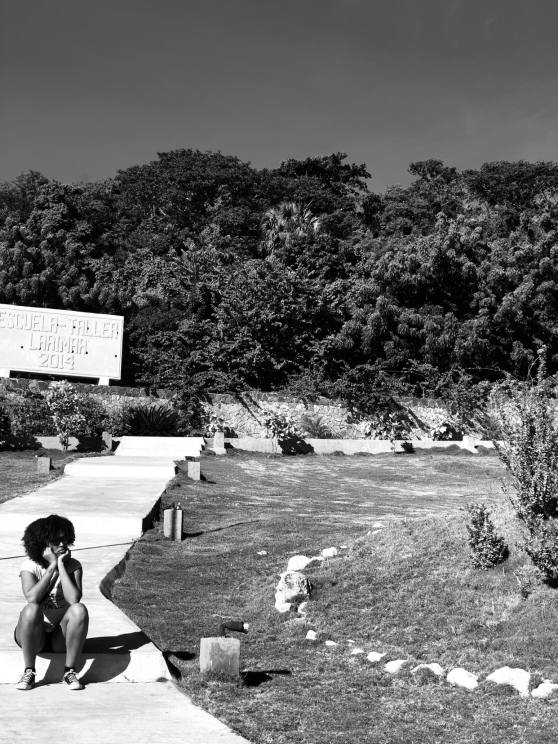 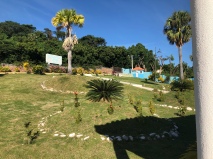 Haiti broke my heart. Into a million pieces. This is the only thing that separates it from DR. A gate. American readers, we are privileged beyond belief. There was nothing that I could say that can bring any sense of relief to these people. This is when everything I learned about the power of words went out of the window. They were just that. Empty words. 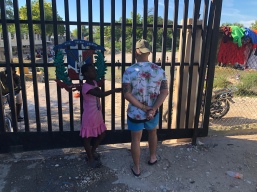 Our lunch and dinner were provided at a lovely restaurant called Ibiza. I am now a lover of fried plantains (which i definitely hated before this trip) and mashed yucca root. The food here is amazing. And guess what, the only thing I’ve added sugar to is my coffee! Unfortunately, because I’m eating everything and nothing that I’m used to, I’m finding that the poot chute is a bit backlogged so I have a terrible stomach ache. TMI. Lo siento. 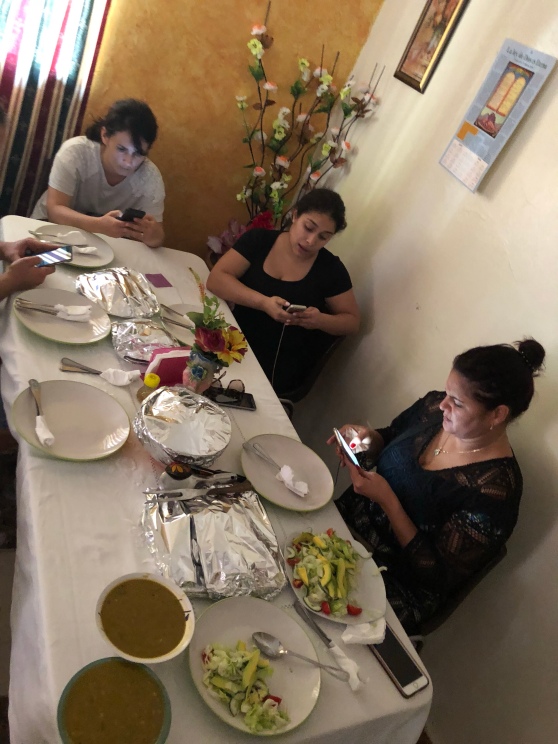 The beaches. One word. Breathtaking. I’d go into my deep thoughts about how it made me reevaluate a few people places and things in my life but it’d change the direction of this blog. Just know that 2017’s theme was “Finish”. 2018’s is “Fearless” (yep, you guessed it, a blog about that coming soon as well).

Hope you guys enjoy the pics. Plenty more to come. 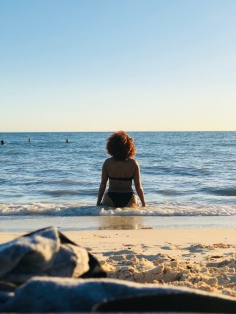 And I ate some more at a few more of the stops.

After 27 years of living in fear, I have officially learned how to swim. Right here in the Dominican Republic. My instructor was amazing! And peep this, I was taught 95% in Spanish. Y’all know what I did when I realized I was doing something that I never thought I’d learn to do? I cried. Thug tears of course. Everybody knows how terrified I am of the water. Of course there is a full blog coming about it.

Speaking of, guess who had a full out panic attack on the tour boat going to another part of the beach? Yep. I had to gather myself quickly because the boat was taking off regardless. And I’m sure that my life jacket was so tight that it was cutting off my circulation. Nevertheless I’m anxious to get back into the water when I get home in hopes that I don’t forget everything I learned. If I tried to describe the beauty of the beaches, it would do no justice. So just see the images below. 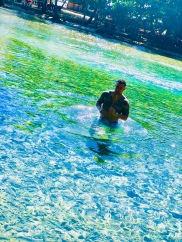 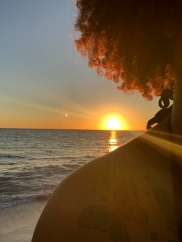 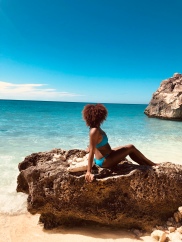 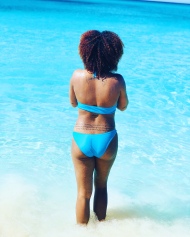 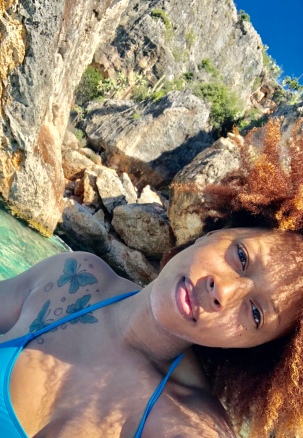 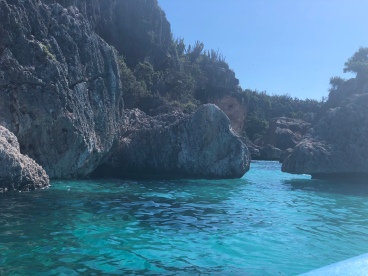 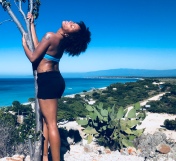 Today is the last day. This vacation has brought me all the way back to life. I’m not looking forward to leaving 90 degree weather. Because I couldn’t get a card for my new Dominican family, I decided to write them a heartfelt letter about how much I appreciated their hospitality and all of the meals that they prepared for me. They assured me that I am always welcomed to stay in their home. And it’s back to reality at 8am tomorrow. FML.

Moral of the story kids. When your homeboy says I’m going back home, you should come, book your flight. Don’t hesitate. Save if you must.

No matter where we end up in life, I’ll be forever indebted to Rafael for presenting me the opportunity to even take this trip. PS ladies, he’s single. But if you screw him over, you screw me over. NO BUENO.

This was THEE most humbling experience thus far in my life and I’ll never forget it. All of the hospitality that was show, all of the food that was prepared and all of the rides given are memories that I will never forget. Muchas gracias to Tio Victor y Tia Virginia for allowing me into their homes and for sharing their culture with lil ol me. And the best part, they told me that I will forever have a home to stay in when I come.

3 thoughts on “Read All About It”